Home » About Us » The Founder 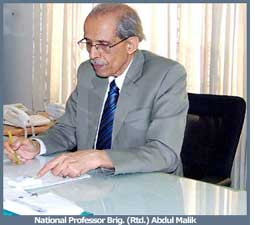 National Professor Brig. (Rtd.) Abdul Malik is the visionary who inspite of immense difficulties and setbacks firmly established cardiology as a specialty in Bangladesh. He has outstanding contribution in the field of prevention and control of cardiovascular diseases in this country. He was the key figure in creating modern facilities for cardiac patients & educating and training of manpower.

Prof. Malik passed MBBS in 1954 from Dhaka Medical College, Dhaka as a regular student. He joined Pakistan Army Medical Corps in June 1955. For higher education he was sent to U.K in 1963 by govt. After passing MRCP in 1964 he received higher training in Cardiology at Hammersmith Hospital, Post Graduate Medical School London and other hospitals in U.K from March 1964 to February 1966.

After returning from UK in March 1966 he set up a Cardiac unit in Military Hospital Rawalpindi, Pakistan (now Armed Forces Institute of Cardiology-AFIC), and trained the nurses and other relevant staffs to successfully run this unit. In March 1970 this center performed the first successful open-heart surgery operation in Pakistan. He joined Institute of Post Graduate Medicine and Research, Dhaka (now Bangabandhu Sheikh Mujib Medical University) in June 1970 and established cardiac unit and worked as Professor of Cardiology till June 1978.

National Professor Brig. (Rtd.) Malik is the founder president of National Heart Foundation of Bangladesh, which was formed at his initiative with some medical and non-medical social worker in 1978. After retiring from the government service in December 1989 he actively involved himself in various activities of this organization. This is a non-government and non-profit organization and affiliated with World Heart Federation. The Foundation has established a 450-bedded cardiac hospital in Mirpur, Dhaka with support from government & individual organizations of home and abroad. All types of modern investigations and treatment and Open Heart Surgery including Coronary Bypass Surgery are done regularly. MD (Cardiology), MS (Cardio thoracic Surgery), Nurses training and other technology courses are also run to create trained manpower. Foundation has got 41 affiliated bodies so far in different parts of the country.

He was also the Vice President, Asian Pacific Society of Cardiology from 1994 to 1999. The Former Advisor, Ministry of Health and Family Welfare and Religious Affairs, Care Taker Government of Bangladesh in 2001.

He attended and participated in many National and International Seminars, Symposium and Conferences in different countries. He has many publications in various Journals in his credit. He has written 5 books in Bengali titled -‘Jiboner Kichu Kotha’, ‘Alor Path’, ‘Jibon Jagat Safalata’, ‘Jibon Rohossho’ and ‘Safalata’. The copy rights of these books have been donated to National Heart Foundation Hospital & Research Institute, Dhaka and the revenue earnings from these are deposited in the charitable fund "The Lillah Fund" for the treatment of poor patients. Professor Malik is a Fellow of Royal College of Physicians (Glasgow, Edinburgh), Fellow of Bangladesh College of Physicians & Surgeons, Bangladesh, Fellow of American College of Cardiology and the Fellow of College of Chest Physicians (USA). He obtained different prestigious awards and medals for contribution in Medical Science and Social Works. Got highest Award from Government of Bangladesh "Sadhinata Padak" (National Independence Award) in 2004 for contribution in Health Education and Medical Science and "National Professor" in February 2006 for contribution in Health Education and Medical Science. He has been decorated with honorary PhD Degree by Bangabandhu Sheikh Mujib Medical University (BSMMU) in 2015. He was also awarded 'World No Tobacco Day Award 2014' by World Health Organization (WHO).

In personal life Professor Malik is a happy man. His wife Mrs. Ashrafunnesa Khatun is a social worker. They are blessed with 3 (three) children. His eldest daughter Professor Dr. Fazila-Tun-Nesa Malik is a renowned interventional Cardiologist of the country, now working as professor of cardiology and chief Consultant cardiologist at National Heart Foundation Hospital & Research Institute, Dhaka. The eldest son Mr. Masud Malik, M.Com is an industrialist. The youngest son Mohd. Monzur Malik, MS is working in Canada as a researcher.

Prof. Dr. Abdul Malik is a humble man. When questioned on how he could accomplish what he has, he replied that it was selfless desire with action and God’s grace that made all possible.